During the 2012 Olympics Fire Systems Ltd, designed and installed a wireless fire alarm system for a camp site with temporary accommodation for the cleaning staff for the Olympic stadium.

As you can see from the video, the site is spread over a large area and consisted of approximately 132 portable cabins, a kitchen, eating area, welfare facilities, first aid room, games room, security centre and an on-site power station.

Following the results of a fire risk assessment, the management was advised to provide some form of automatic fire detection within the cabins and the areas of high risk such as the kitchen and power station.

The two options available would be a wired or wireless system, as you can appreciate installing a wired system would be very labour intensive, with a fair amount of cable required. Furthermore, some of the cabins were of a metal construction, and there were no additional cable entry points, as the cabins are vented and sealed to keep out the damp.

Our design team choose the obvious solution which was a wireless fire alarm; however, we did have some concerns regarding the metal cabins and the radio signal strength in these units.

The fire safety management team responsible for the site requested the programming of the fire alarm system as follows: Activation of a detector in the cabin is to start a 3-minute delay of the Sounders, but send a signal to the on-site security personnel. The security personnel have 3 minutes to cancel the alarm following their investigation. However, if it is a real fire incident or the 3-minute timer elapses the Sounders in that zone only will operate. With the system being addressable it made it very easy for the security personnel to quickly identify which cabin or high-risk area had gone into alarm, this feature assisted greatly locating the source of the activation within the 3-minute window.

Our design comprised of Radio Translators and Expanders allocated at strategic locations throughout the site and once in place, we were able to assign the wireless detectors, manual call points and sounders to the nearest Radio base station (which is either a Translator or Expander) offering the strongest signal.

Attempting to wire a fire alarm on projects such as this will require a large labour force to install the cables. Furthermore having so much cable on-site can be a danger if run at a low level or a challenge to install high enough so that they are out of the way of being damaged or not a health and safety issue. A wireless fire alarm is an easy, practical and the cost effective option for projects such as this.

On this project, the client opted to lease or Hire the equipment as he did not have another installation that he could see himself using this system again in the near future.

Another big advantage was as this project was for temporary accommodation, the wireless fire alarm can be decommissioned and store it away, this saves the client from having to look after the equipment, keeping it in good working order until it is required again.

We offer a range of lease and hire packages of quality wireless systems. Our packages include the design, installation and maintenance of the system during its lease or hire period. 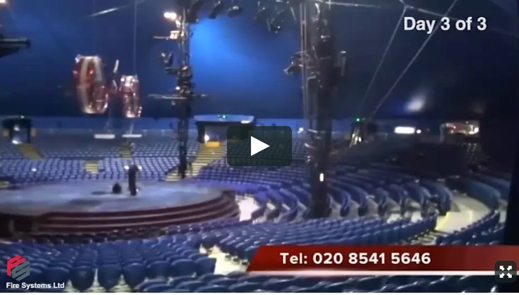